2018’s first release from Panini has a checklist! I’ve broken them down by type, and team, naturally. Some tidbits first – every current team(Expos – 2) have at least four base cards, one insert, and two auto/relic/buybacks. Only 24 teams are represented on the base variation list. Team USA has 24 “inserts” including top prospects Seth Beer, Nick Madrigal, and more. Should be a fun set to chase again this year. :). 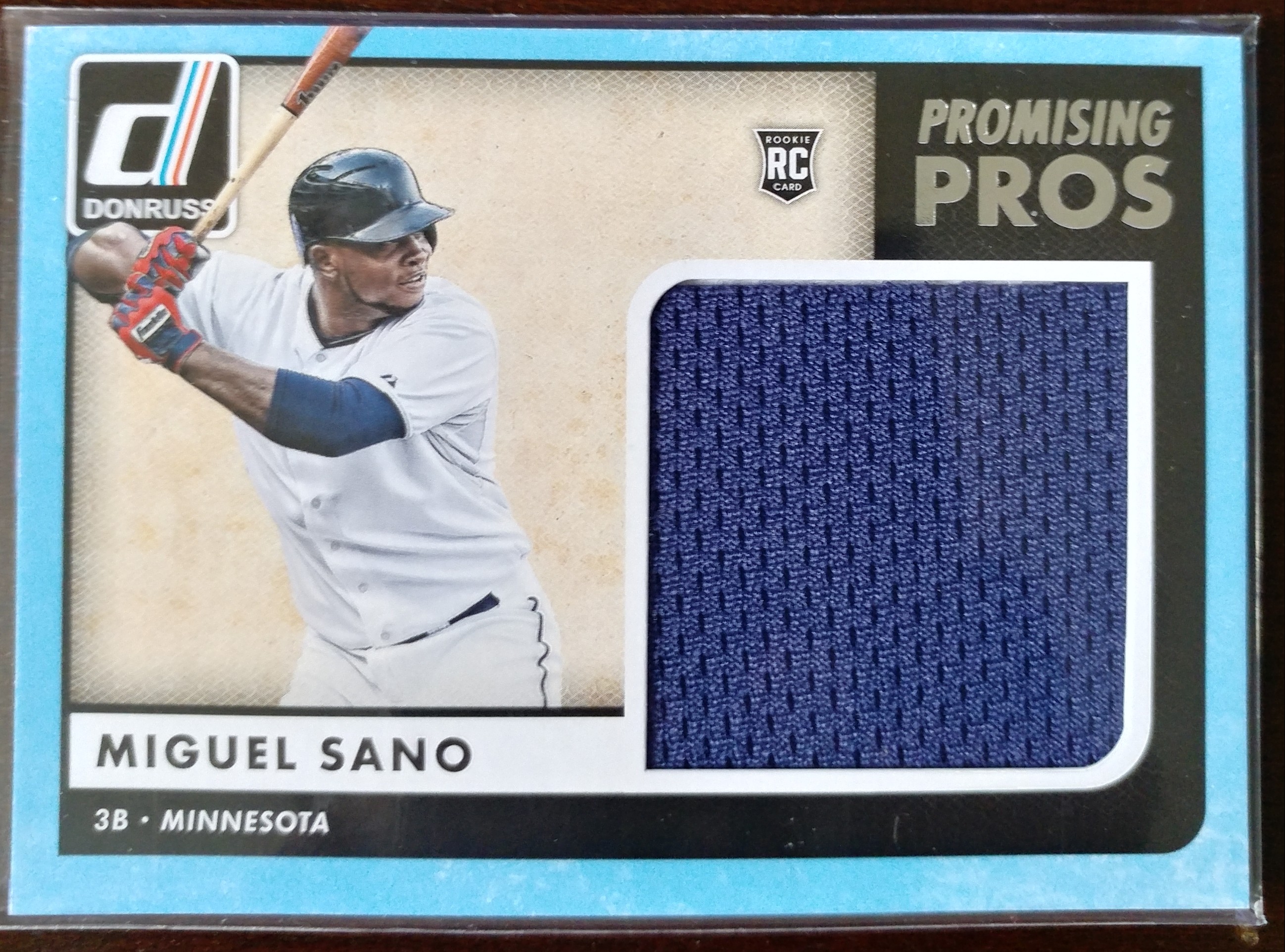 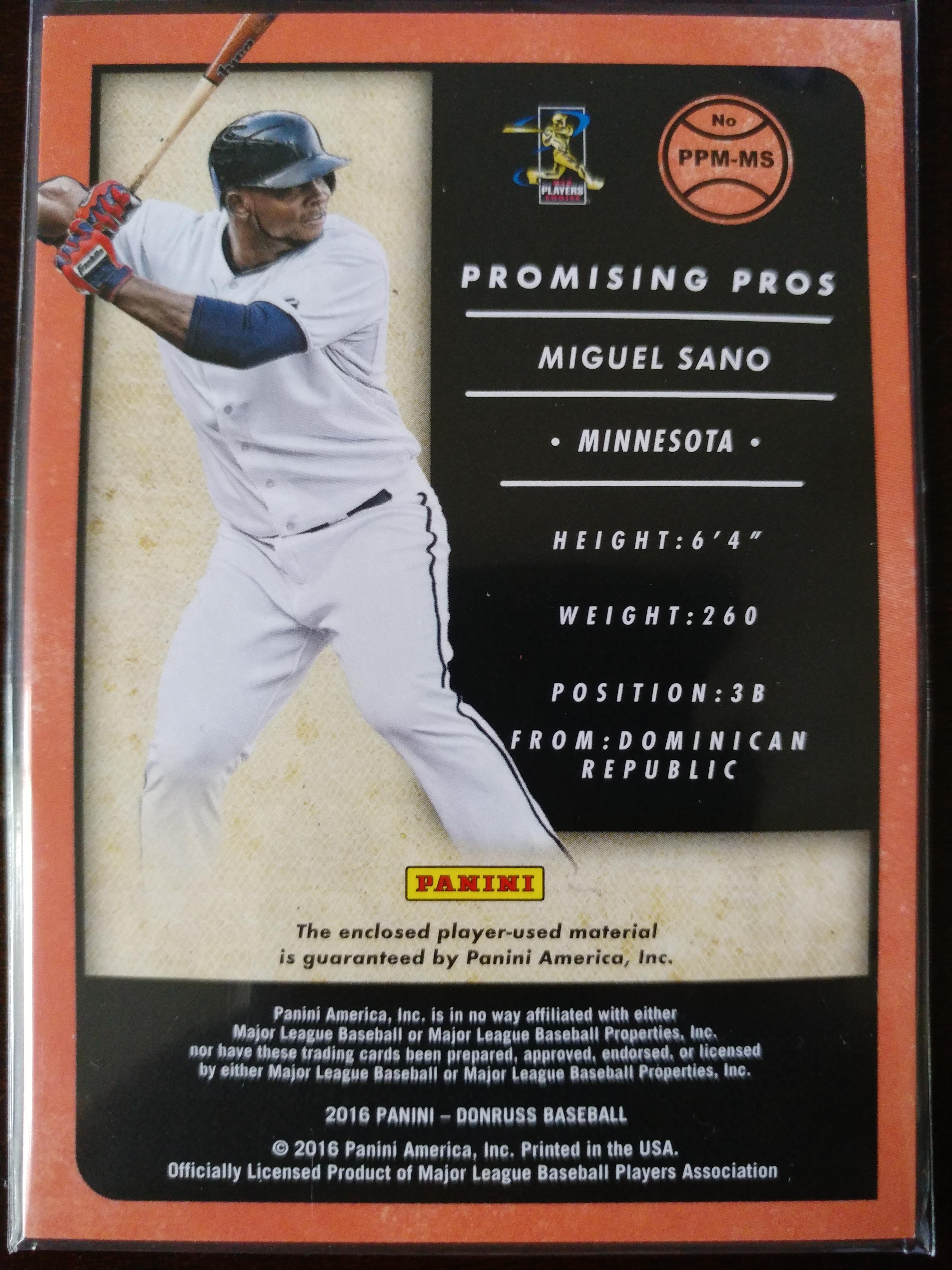 This sweet relic came in a trade with Tracy. A “rookie” year huge relic from the crew at Panini. This is far from my first Miguel Sano relic/auto, but the first relic without an auto included. Woot. I believe these ‘Promising Pros’ relics were more common in retail than hobby.

Last year I drove across the mid-west getting married, on our honeymoon, and driving to the National and back in our personal car. This year, I helped drive my best man and brother from another mother(cousin) move from Ohio to Minnesota. Next year I’m not driving anywhere! However, while I was out and about, I stopped in a few different cities to check out the card stores/retail chains. I’ve posted most of these on twitter, but as Paul Harvey was fond of saying, here’s the rest of the story…

I left Texas sometime around the early morning of the 17th of May with the intention of being in Dayton around midnight. I’ll never forget the day, as prior to leaving we found out about the death of a music legend, Chris Cornell. His music(whether in Temple of the Dog, Soundgarden, as a solo artist, or with Audioslave) has been always been an influential part of my life, and it’s a shame that he’s passed.* As far as making it to Ohio that night, our tires had other plans. As around Nashville both right side tires would not stay inflated. I tried stopping to fill them up a few times, and I could limp for an hour without needing to refill, however they wouldn’t stay inflated. My wife’s a magnet when it comes to attracting nails in tires, and these had been plugged a few times. Thus I decided it was probably for the best to crash for the night, get them changed in the morning, then drive the remaining 5-6 hours. That morning while waiting for my tires to be changed, I grabbed a few retail packs of 2017 Donruss. While I can’t be certain which individual packs they were, I posted on Twitter my entire trip’s worth of Donruss/retail pack breaking here. With the right side tires replaced, rotated, and filled I set out for Dayton.

When I made it there, my cousins(best man, and his younger sister – my god daughter) and I stayed up super late and played different games on my Nintendo Switch. That next morning I figured it was probably best if I stopped by and said hello to the in-laws(same town), and helped the father in law move his truck onto a trailer so he could sell it later that week. Beats mowing his lawn, eh? Lol. For this, his wife(mother in law) rewarded me with the Nintendo line-up of toys that McDonalds(where she works on the side) had at the time.

Later that day, we stopped in at the local card/comic/gaming shop – Mavericks where they had a discount bin of 3 relics/autos for 2$. I was pleasantly surprised to find several Hall of Fame, and future Hall of Fame members from the “relic boom” era of the early 2000s. I may have even started a binder sorted by induction year because of this discounted box. Also, they had junk 4,000 count boxes for 4$ each, of which the one that I purchased, I’ve yet to fully dig through – but most of it is from the junk wax era, naturally.

A day or two later, we set out for Minnesota with cookies and monster handy for the equally long 18 hour drive. We stopped for breakfast in the Twin Cities, and made a stop into ‘topher‘s favorite LCS 3 Stars. Here I picked up a Heritage team set(minus SP/inserts), and a bargain box.  The latter of which, I broke down in the replies below the bargain box link.

When we finally made it to northern Minnesota, we both crashed hard at our grandma’s house. There’s absolutely nothing around, and if you leave our hometown in any direction there’s no cell phone signal for hours. It’s a dark hole of technology. Everything moves slower up there, they get major life changing gadgets years after they’ve released – the sports bar finally got wifi! Last year! I suppose waste not, want not is most important for the mostly rural farmers.

We did drive down to the nearest bigger town to stop in at Wal-Mart for groceries for the final leg of our trip. Naturally I checked their sports and toys aisles, nothing intriguing sports wise, but I did get a rare World of Nintendo Ganon 2.5″ figure. Woot. From there, we drove down to Fargo where after lunch with his father and grandmother, I left my cousin behind and rejoined my grandma and uncle three hours north. But before leaving Fargo to return to my hometown, I wanted to check out Fargo’s visitor’s center to see the wood-chipper from the movie(Fargo, duh…). I was saddened to hear the Roger Maris museum was temporarily closed after a major theft last year that the FBI is/was investigating.

There’s something about grandma’s place that feels safer than any other. She lives 17 miles from our hometown, in a town of ~300, mostly middle aged and elderly folks. The town’s got two gas stations, a grain depot, a bar, two churches, and co-op schools serving K-12. There’s absolutely nothing around for miles, and it’s just perfect. I need to go up there every so often just to completely refresh the brain batteries. :).

The wife found cheap flights and flew in the Friday before Memorial Day and flew into Minneapolis, so I drove down the 6 hours and after picking her up, returned up north. She had arranged for us to catch the Twins game that Sunday – but only booked the hotel for Sunday into Monday. While driving home, AGAIN the tires went out – this time the other two. So we slept in the car in the parking lot of a Walmart outside of Alexandria, Minnesota. While there, we grabbed a few packs of 2017 Donruss, and a discounted Bowman from 2016. In the morning while getting the other two replaced, they informed us that the tire shop in Nashville didn’t rotate them, and that both new tires were placed on the right side – passenger and rear. The tire shop in Minnesota swapped them around however and replaced the remaining two older tires.

With the tires taken care of(and a 2 ton jack purchased….), we made the trip up to my home town and had a dinner party at my uncle’s place. Before driving the 17 miles to grandma’s for bed, we stopped in at the ‘barely staying alive’ K-Mart. Inside we grabbed these Angry Birds Twins stuffed animals for a buck each. In the morning, grandma made her specialty pierogies for breakfast before helping us pack for the return trip to Minneapolis.

We arrived in Minneapolis just in time for the team to open the gates – two hours early. We’d been hoping to catch a few of the local sights after the game but… little did we know, the Twins were about to play the longest game in Target Field history – six and a half hours! 15 innings! During the game, which the Twins lost, we met up with the team’s mascot T.C. and got his signature on our ticket, saw a deranged drug addict run on the field, and enjoyed our favorite stadium food – a Cuban sandwich from Tony O’s(Tony Oliva’s restaurant if that weren’t obvious…) stand near the gate we entered.

After the game we were wiped, so we decided on checking into our swanky, spendy, 5 star hotel in downtown. Really. It was right across the street from First Avenue, the Target Center, and the Mayo Clinic. The first of which, we checked out the attached restaurant and had two Purple Rains, and a Grave Dancer. Pretty good drinks, obviously named in honor of Prince, and Soul Asylum.

Before leaving for Texas the next morning we checked out a few of those local sights, including the Spoonbridge and Cherry, Minnehaha Falls – no Little Hiawatha to be found, and Mickey’s Diner – yes the same one from Mighty Ducks and a few other movies/TV shows. In a semi-funny twist of fate, the return trip to Texas, was about the same amount of time it took me to get to the Twin Cities, pick up the wife, and the entirety of the Twins game.

So with all of that, you might understand the blog absence. The wife spoiled me with a few hobby boxes of Diamond Kings after we made it back, and tomorrow I’ll share some of the pictures and background story for those of you who missed it on twitter. :).

Our second box from Nicks that we opened was a box of 2015 Donruss that had been slightly discounted and what a hot box it was! I’m not sure what a normal box yields, but ours had 11 serial numbered cards, three autos, and a bat relic. It broke down like this: 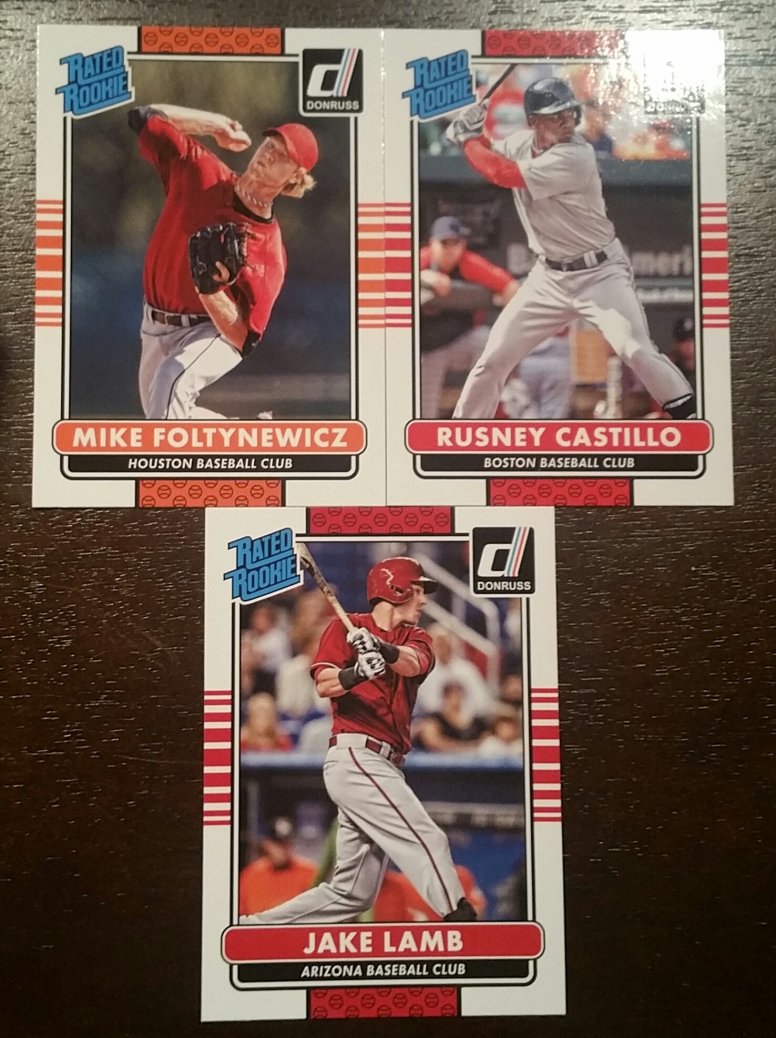 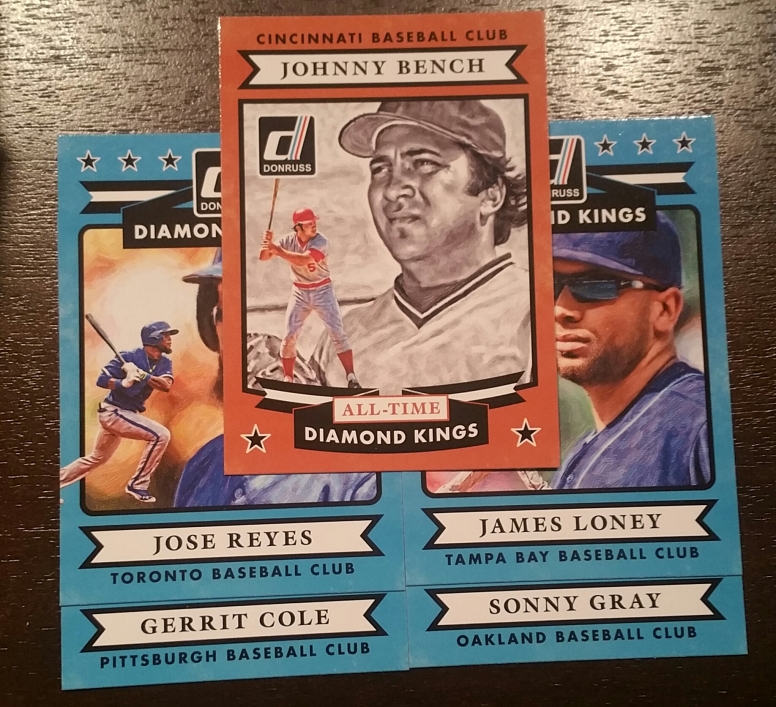 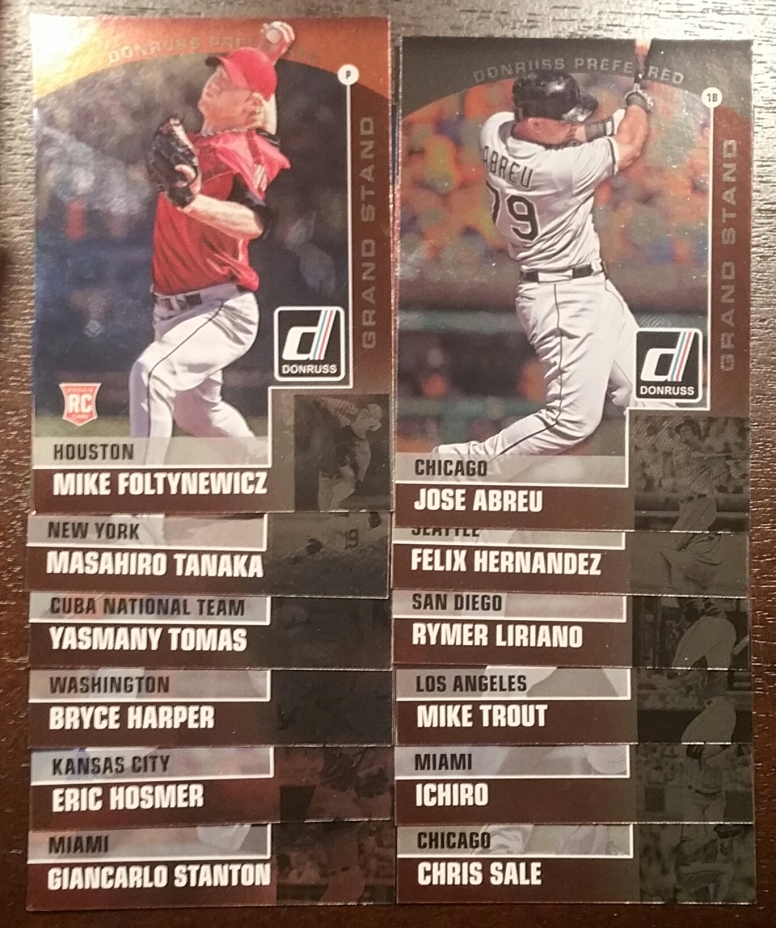 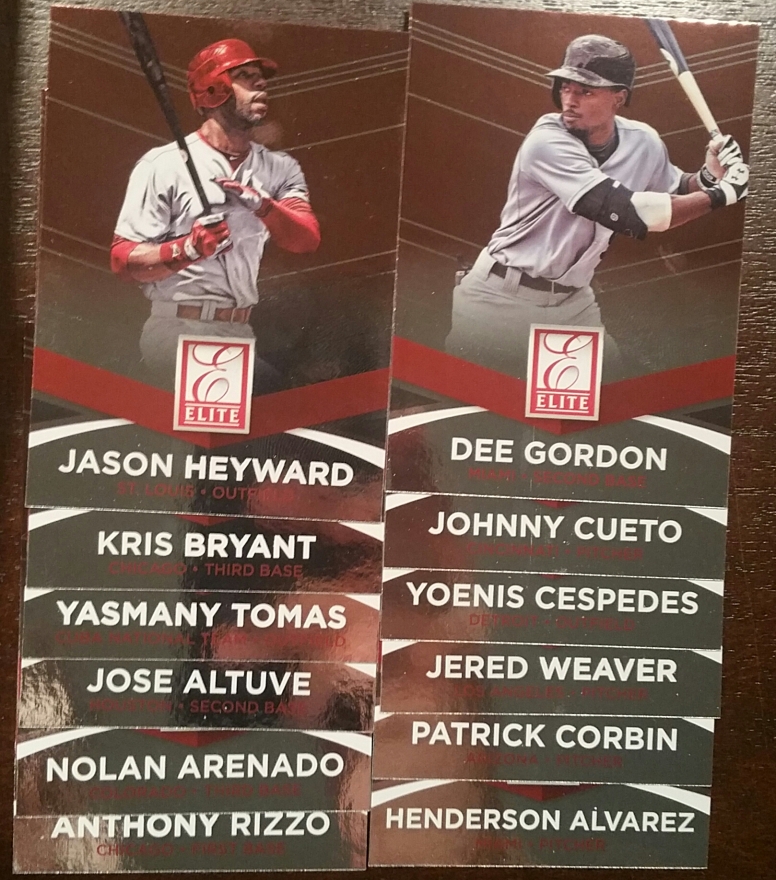 …and one Tony Gwynn card that highlights his .338 career batting average. For our serials we got the below: 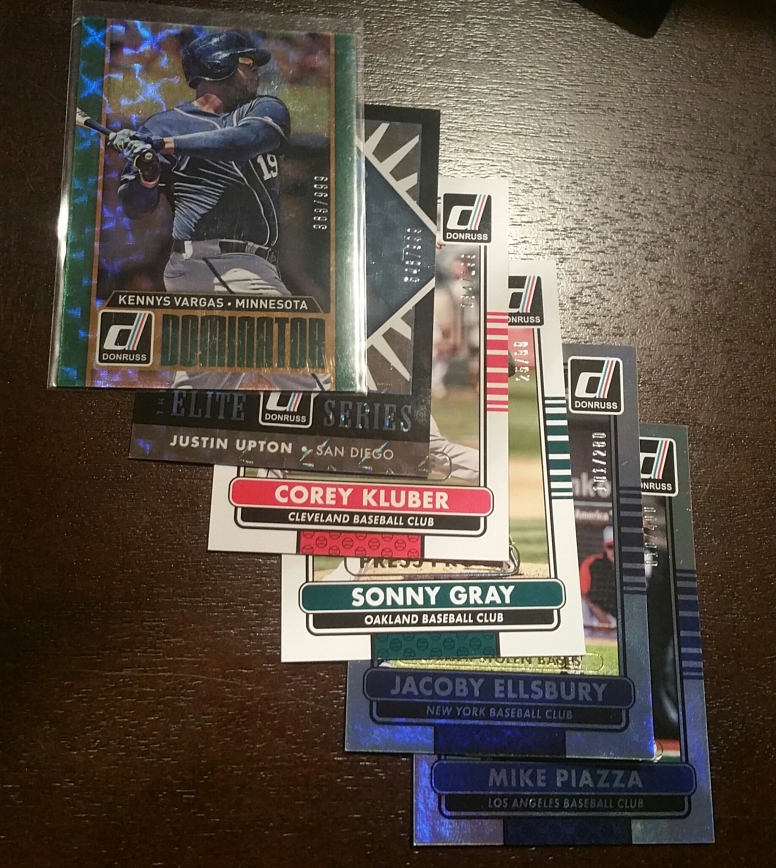 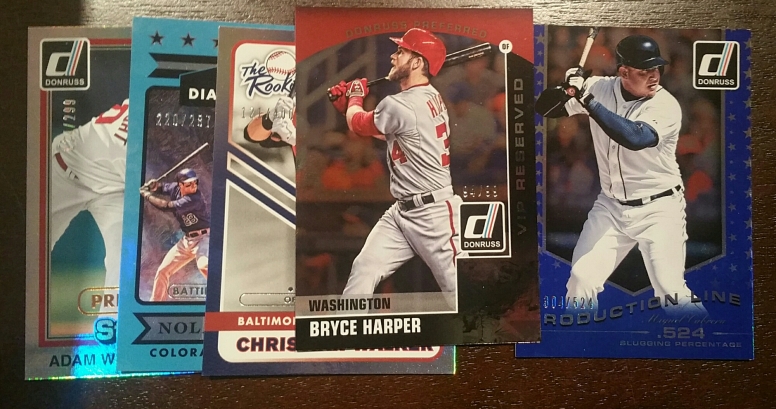 For our hits we yielded these three very AL Central(but not Twins…) heavily representative autos:

and this Bat Kings relic: 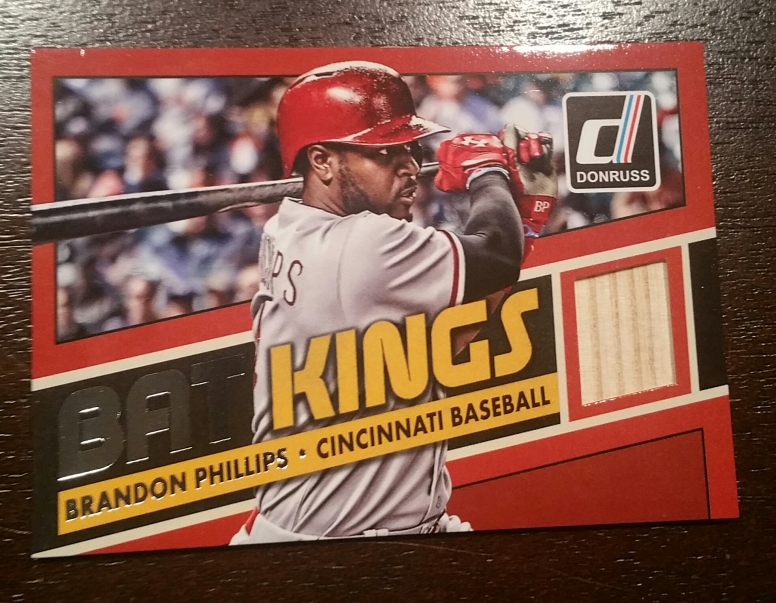 Overall, not a bad break. I loved some of the inserts, especially the Heritage-like using of older designs, and naturally the Kennys Vargas #/d. If you don’t mind not having logos and team names, this is definitely a low end must purchase.

Up Next: Panini Perennial Draft Picks/Prospects, box #3 of the day.

After his surgery I wanted to comfort JunkWaxTwins so we grabbed a few retail products and broke them. We tried one 10$ box of 2016 Topps Heritage, a blaster box of 2012 Goodwin Champions, and four hang down packs of 2016 Donruss. We’ll start this review with Donruss.

There’s only so much that can be said with Panini and their lack of an MLB license. For the price, I don’t see why you would buy a blaster box when you get nearly the same amount of cards breaking a hang-down pack. Odds be damned. Here’s what we pulled: 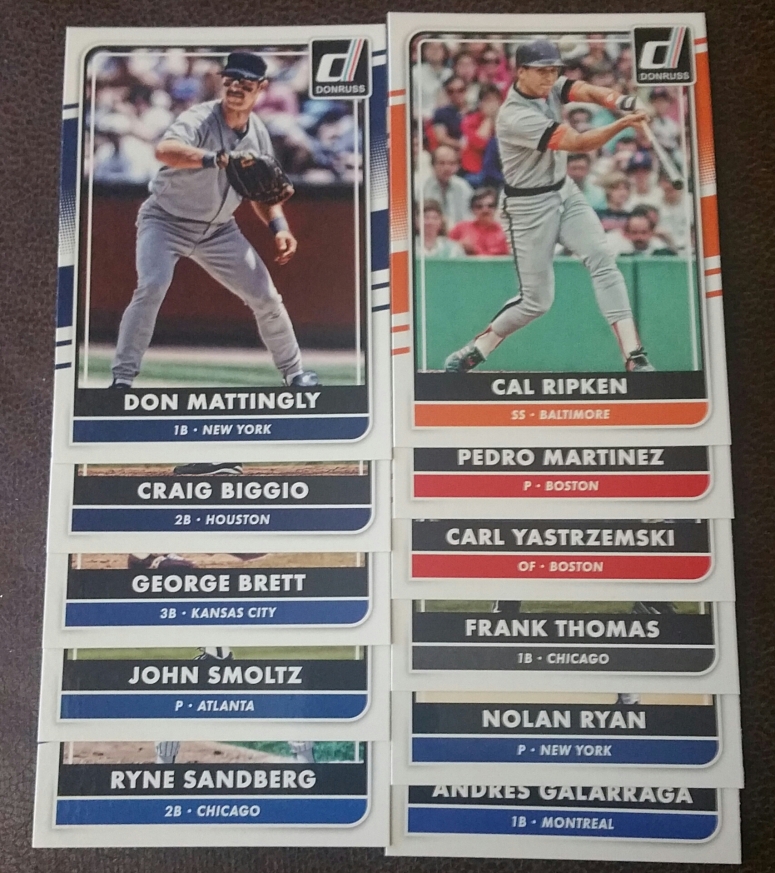 1 Masters of the game 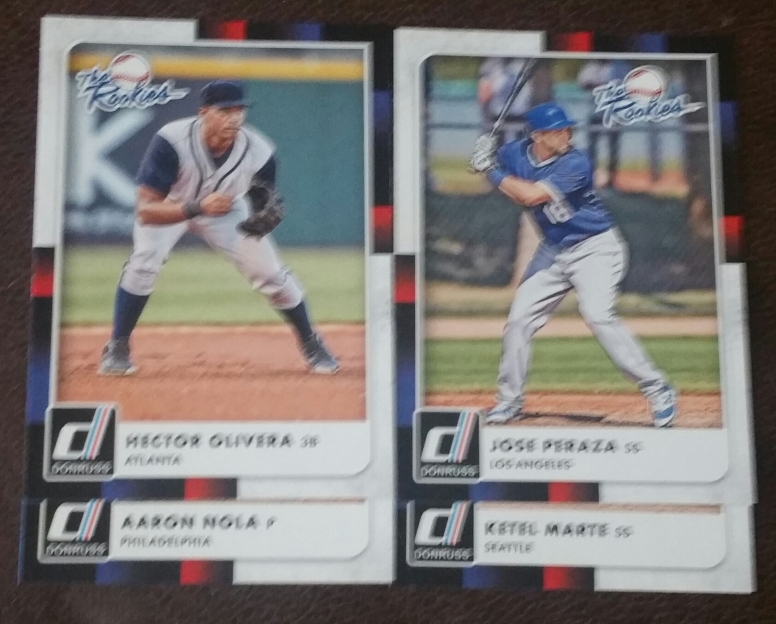 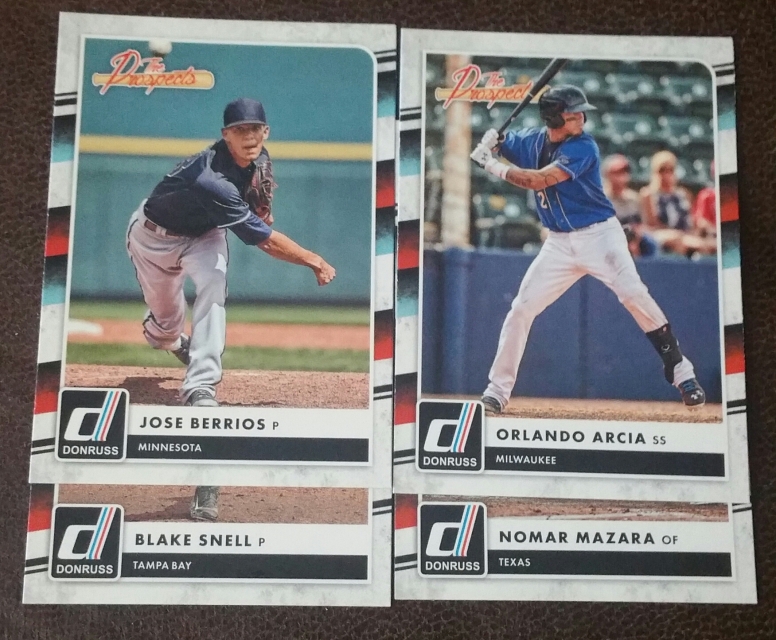 2012 Goodwin Champions was a very discounted blaster box that we figured “Eh, why not?” We received a wide range of stars from sports outside of the big four(MLB/NHL/NFL/NBA) and even some from them. We also pulled an insert – Military Machines, and our five guaranteed minis. The product feels like an attempt at Allen & Ginter, but it doesn’t live up to it’s predecessor. 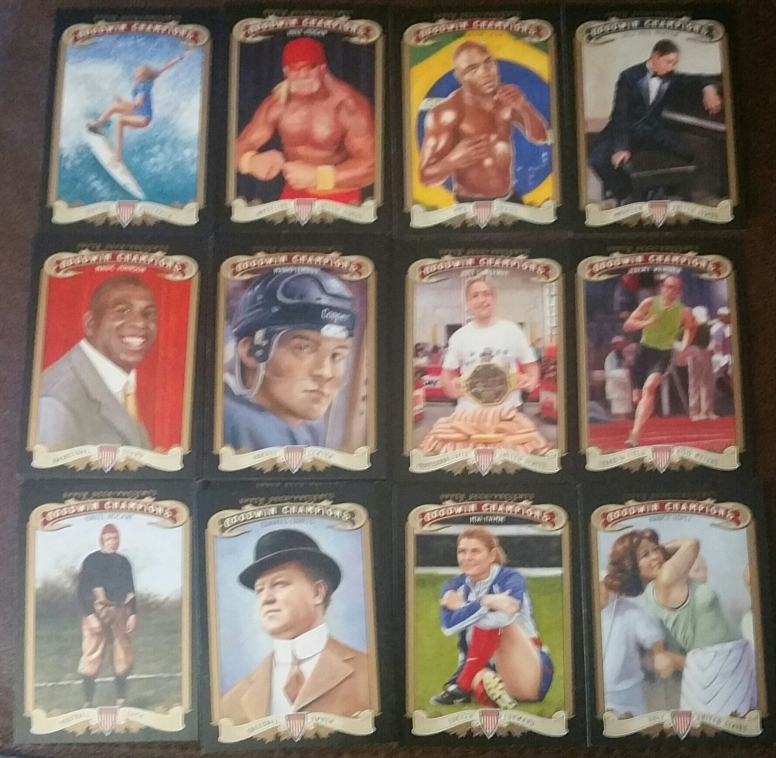 Base, sorted by sport. 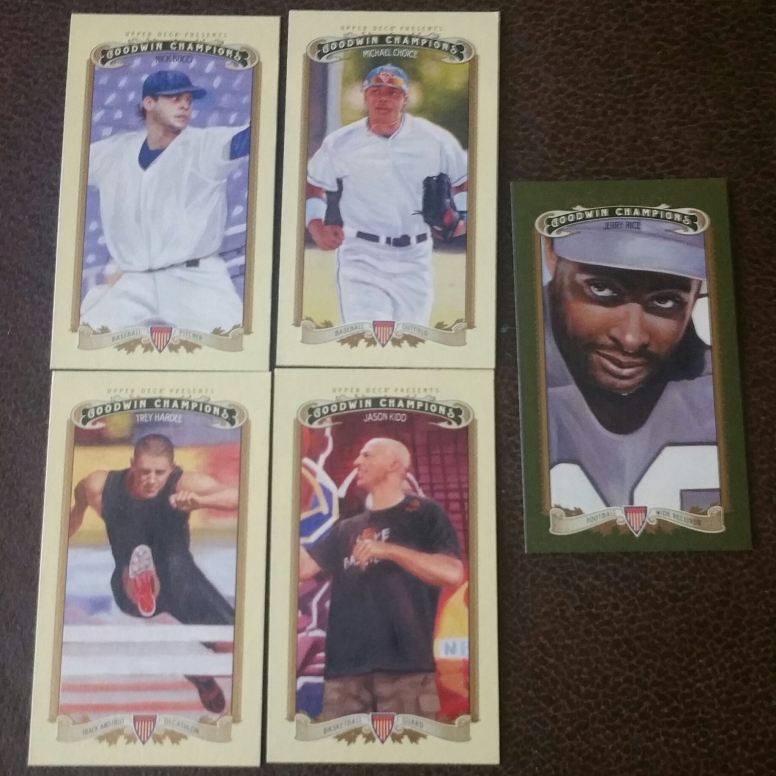 This box says to look for Real One Autos or Relic cards! We got neither, but here’s what we did pull was 32 Base cards including 3 team cards(Angels, Giants, and Brewers), and two AL/NL Rookie Stars(Severino/Sano!, Conforto/Nola). For inserts, we pulled a World Series highlight(Game #5), and a New Age Performers(Sonny Gray). Rounding out our retail break, we also found a Billy BUrns #/999. Pretty meh box, but I do love picking up Miguel Sano cards. 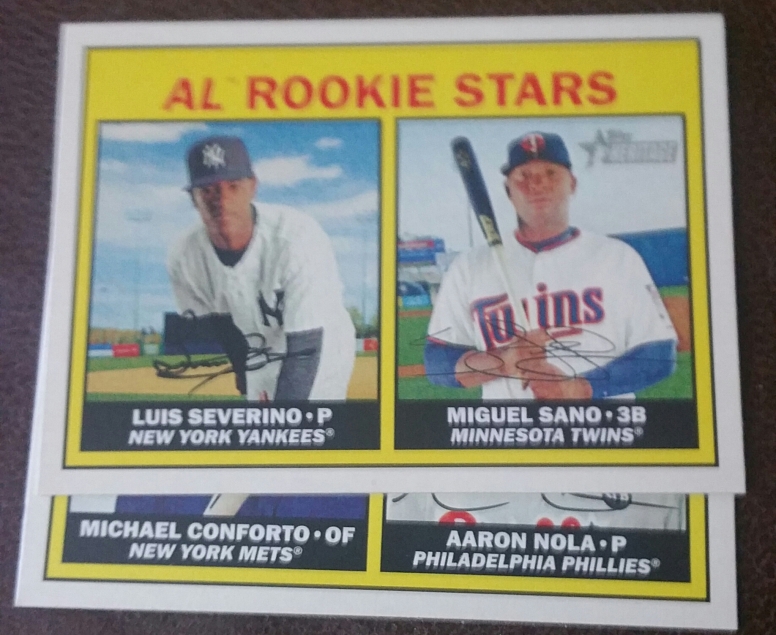 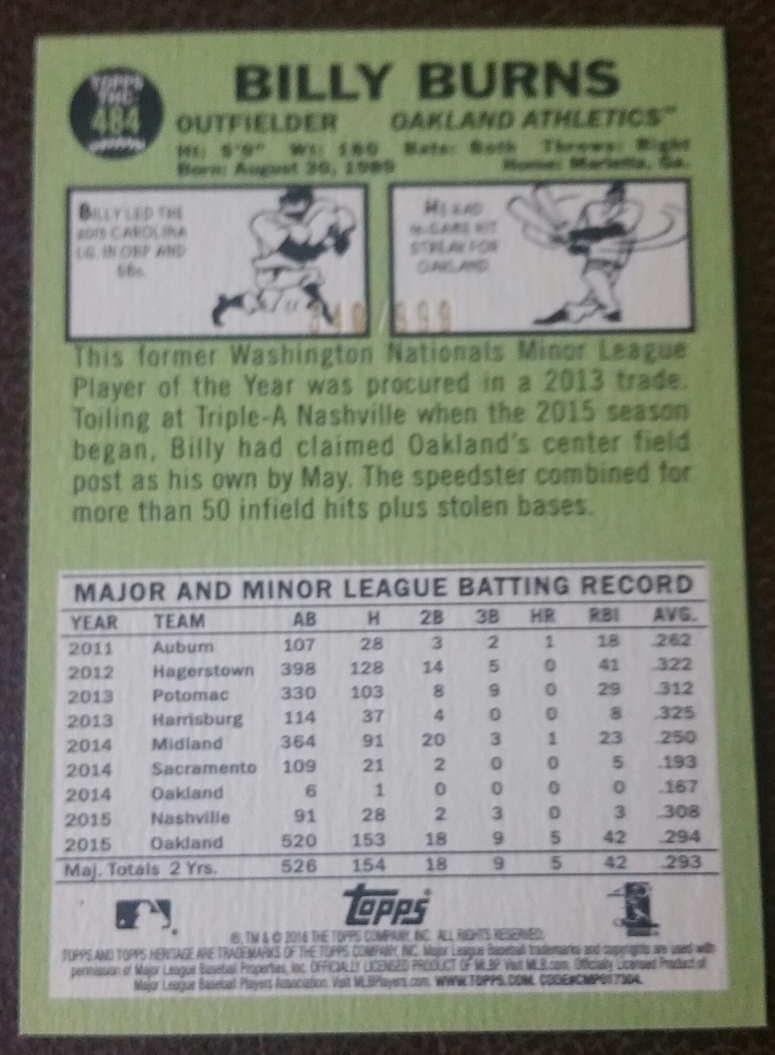